This product has the following functions.

1. LC/MS measurement by using phosphate buffer as a mobile phase.

Phosphate buffer is a mobile phase that has been commonly used in LC that use detectors such as UV.
The reason is that it has a low background because it does not absorb UV light, and it has a buffering capacity in a wide wavelength range.
However, since phosphate is non-volatile, there is a problem that it precipitates at the ion source of MS ESI or APCI and causes clogging of capillaries or it contaminates the ion source and raises the background for a long time. Furthermore, since phosphate is easily ionized, there is a big problem that it suppresses the ionization of the compound to be analyzed.
Since Salinac Tube adsorbs phosphate, it solves the problems above and enables LC/MS measurement using phosphate buffer.

2. LC/MS measurement by using TFA as a mobile phase.

TFA (trifluoroacetic acid) is often used as a mobile phase when analyzing basic compounds with LC in peptides and small molecules.
Since it is volatile, it can be used for LC/MS, but it is extremely acidic and causes ionization suppression of the analysis target.
By removing TFA with a Salinac tube, LC/MS measurement by TFA is possible.

3. ESI ionization when Na+ and K+ are contained in the solution.

During ESI ionization, the addition of trace amounts of Na+ and K+ in the solvent to the object to be analyzed complicates the mass spectrum.
Therefore, it is required to obtain a simple and easy-to-analyze mass spectrum of only H+ adduct ions without Na+ or K+ adduct ions.
Salinac tube achieves this by adsorbing Na+ and K+ ions.
In addition, the ions generated by the addition of Na+ and K+ are structurally stable and difficult to cleave with the CID of MS/MS, making MS/MS measurement difficult. However, by using Salinac tube, it can be aggregated into H+ adduct ions and MS/MS measurement turns to be possible.
However, if Na+ or K+ is more likely to be added than H+ due to the nature of the original target compound, the effect of Salinac Tube will not be exhibited, so please consult us in advance. 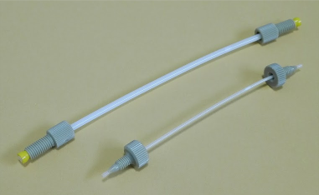 With phosphate buffer, LC/MS measurement is along the time. 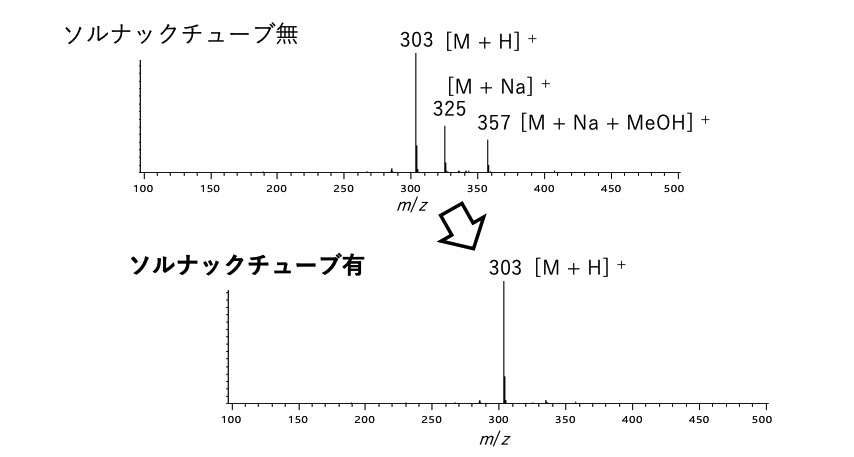 IMS is a technique to visualize the spatial distribution and mass information of molecules, so IMS gets a map of molecule information in the tissue or organ. This label-free method makes a compound analysis more reasonable and prompt than autoradiography, which is a traditional method.

Our company has high-resolution LC-MS equipment and a Triple Quadrupole LC-MS. According to the customer's needs, we provide the best way. Additionally, our team undertakes the service of structural estimation of unknown compounds.

The disposable tube which can be used for LC/MS measurement in phosphate buffer, reduction of Na/K added ions, and reduction of ionization suppression.